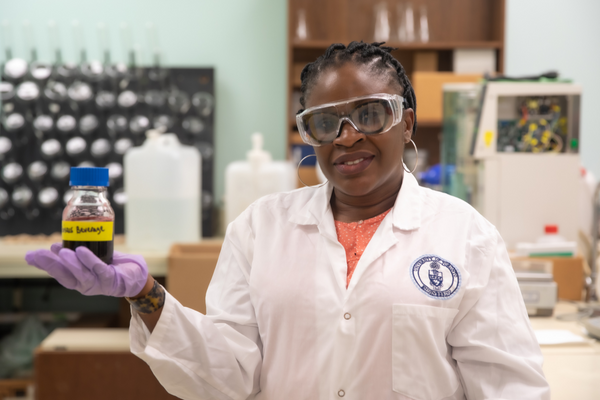 Chemical engineering PhD candidate Folake Oyewole’s thesis project was inspired in part by Zobo, a hibiscus-based drink that is popular in her home country of Nigeria.

“People consume Zobo as a cold beverage in Nigeria because it’s refreshing and claimed to provide many health benefits,” she says. “I wanted to ascertain whether these drinks actually add micronutrients to the body, and if they didn’t, whether we could make it so that they did in a way that could be absorbed and used by the body.”

Oyewole, whose thesis is supported by the Schlumberger Foundation’s Faculty for the Future Fellowship, has always been interested in value-added processing in food and beverages, particularly of resources that are indigenous to Nigeria. That passion led her to join the lab of Professor Levente Diosady (ChemE), who specializes in food engineering.

Diosady’s lab group is developing a new way to fortify beverages like Zobo with iron, which many people across Sub-Saharan Africa, especially women, are deficient in. The new iron-fortified beverage will make use of hibiscus sourced from Nigeria.

That’s why fortifying foods with iron has been a key focus of Diosady’s Food Engineering Laboratory for years. Past projects have included a double-fortified salt, which in trials of 60 million consumers in India was found to significantly improve the iron status of women.

Creating an iron-fortified beverage isn’t as simple as adding some mineral salts into the recipe. Oyewole’s new product needs to account for the unique challenges associated with the dietary habits of the population she is working with.

The human body absorbs iron from well-rounded diets that include meats, eggs and leafy greens, as well as foods fortified with iron. But in Sub-Saharan Africa, many households are limited to eating mostly plant-based diets with very little variety, due to the prohibitive cost of iron-rich meat.

On top of this, many plants have an abundance of polyphenols. This family of naturally occurring molecules — which includes flavonoids, phenolic acids and resveratrol — has many disease-fighting properties, including inhibiting cancerous tumor generation and growth. But polyphenols also bind to iron to form a chelating complex, which prevents the latter from being absorbed by the body.

Oyewole’s fortified hibiscus beverage needs to address both the inadequate dietary iron intake, as well as the reduced iron uptake that results from a diet rich in polyphenols.

“The most at-risk groups who are dependent on plant-based diets often don’t realize that they can’t absorb iron efficiently,” says Oyewole.

“This is why when addressing micronutrient deficiencies at the population level through food fortification, it’s really important to choose the right food vehicle. We want to reach this population with something they are familiar with, something they already produce and consume widely so we can predict the consumption pattern of the population.”

When choosing an ideal food vehicle for fortification, it is also important to choose one that may be centrally processed so that the iron dosage can be controlled, adds Oyewole. And it should not require substantial capital to fortify it to ensure that the unit cost of the food isn’t significantly increased.

Oyewole began her research by analyzing the iron content of the hibiscus calyces — the part of the plant that protects the bud and supports blooming petals — used to make the popular beverage. While Oyewole found it to be relatively rich in iron, 70% is lost during the extraction process, as most of the iron stays bound to the residue that is not transferred into the beverage. She also found that the calyces contain 25 times more polyphenols than they do iron.

Oyewole then fortified the beverage by adding ferrous sulphate heptahydrate, an iron salt, to top up the iron already present. Her goal was to provide a total of 6 mg of iron per 250 ml — 30% of the target recommended daily allowance for women of childbearing age.

To prevent the iron-polyphenol interaction, she introduced a competing chelating agent, disodium EDTA, into the beverage. Previous results in the lab suggest that this substance can release iron from the iron-polyphenol complex and make it available to be absorbed by the body.

Oyewole is also working on ensuring that her iron fortification method will preserve the organoleptic properties of the original beverage — that is, the flavour, texture and colour.

“Iron has a very distinct, metallic taste, so another layer of my work is to make sure that the sensory properties of the fortified beverage — the taste, mouthfeel, aftertaste and colour — matches the original,” she says. “Otherwise, we risk formulating a fortified beverage that will be rejected by the consumer.”

Once this is achieved, the next step will be to form partnerships with stakeholders including government agencies in Sub-Saharan Africa, to make the fortified beverage accessible for the target population.

“Working in the Food Engineering Laboratory has been a great privilege,” Oyewole says. “From an outside perspective, it may seem like we just add micronutrients to food and that’s it. But there are a lot of complexities with the materials we are dealing with, including preventing unwanted interactions between the food vehicle and the added micronutrients.”

“Our research outcome has the potential for significant impact globally. Invariably it challenges poverty, increases productivity and promotes health — it is all intertwined.” 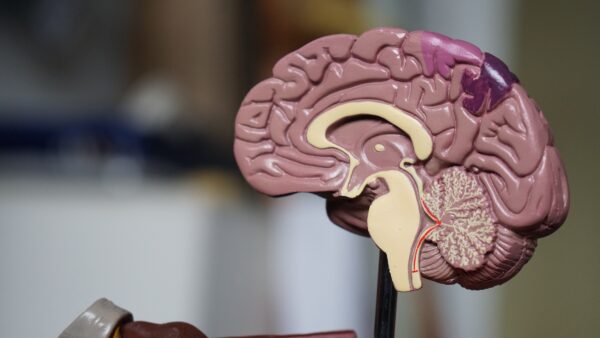 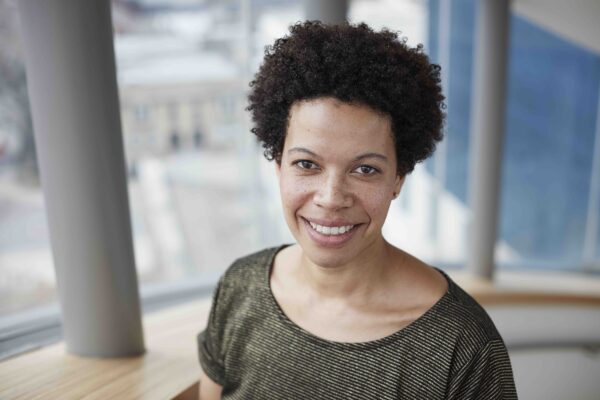